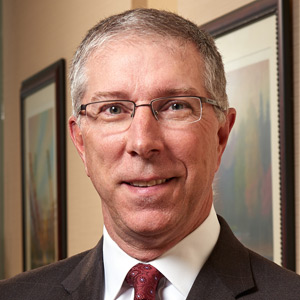 Born and raised in Northern Ohio, Mr. Schoeni worked in private practice in St. Paul, Minnesota, and then as litigation counsel for Minnesota Mutual Life Insurance Company before accepting a position as an associate at Kohnen & Patton in January 1985. He became Partner in 1991.

He is a former civil trial lawyer who now focuses his practice on mediation.  He successfully tried numerous cases to verdict in federal and state courts. Although he typically represented businesses and individuals in defense of claims pursued by injured or aggrieved parties, he served as counsel on behalf of both claimants and defendants. Over the course of his trial career, he has represented claimants who have recovered more than $21 million through settlement or verdict.

Mr. Schoeni is a skilled, experienced and well-trained negotiator and mediator who has written and lectured on effective negotiating skills and completed an intensive, weeklong mediation training program at Northwestern University’s School of Continuing Studies in 2013. He maintains an active private mediation practice, resolving all types of disputes. He is a tireless worker committed to finding creative and fair solutions for the parties who ask him to mediate their disputes.

He has served on various boards and committees of his church and non-profit organizations in his community. When not at the office, Mr. Schoeni enjoys spending time with his children, his three granddaughters and grandson, and all sorts of sports, especially golf, soccer and college football.